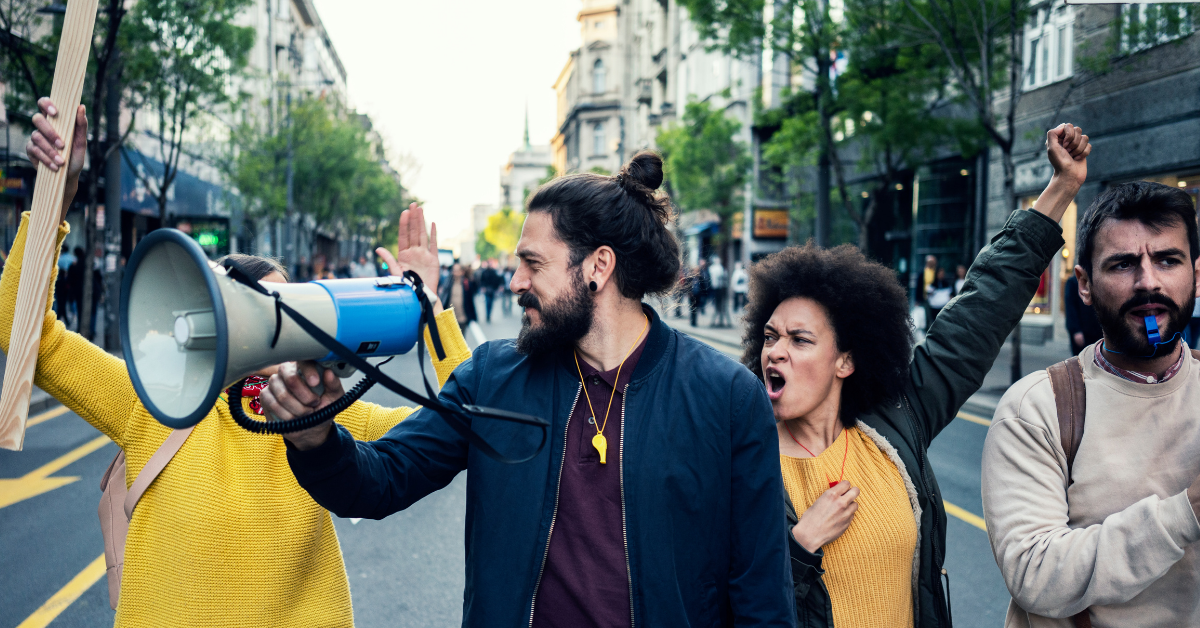 Here I Stand: Protesting as Part of the Pastoral Role

My first protest experience was in November of 2015, after Jamar Clark was killed. I didn’t really know what I was doing, but I knew that a Black man was killed by the police in the city that I call home. I knew that friends, colleagues, and neighbors were headed to Minneapolis Police Department’s Fourth Precinct filled with anger, grief, and a need to express those feelings. I didn’t know much, but I knew I had to be with them. Since that day, I’ve grown to discover that protesting is an important part of how I understand my role as pastor.

Start with showing up

As followers of Jesus, we are called to love one another as God loves us (John 13:34). This is the exceedingly simple tenet of living a life of faith. However, just because something is simple, doesn’t mean it’s easy. The basic calling of loving our neighbor is complicated by all sorts of things, expounded upon by better theologians than I. Love, though, starts with being present. How can I love those people so moved by injustice that they are called to protest, unless I show up by their side? After all, God loved the world so much that God became incarnate in Christ, showing up fully alongside and in the midst of humankind.

Depending on where you live and serve, there could be opportunities to show up almost every day, but you can’t attend them all. Sometimes a protest fits in my busy schedule and I’m able to add them into my week. Other times, an incident is so deeply and widely felt in my community that I will drop everything or at least rearrange my schedule to be at the protest. I need to remind myself to trust my discernment but not brush aside showing up just because I’m busy.

In my experience, right after painful incidents in the community, there can be dozens of marches and protests that spring up through disparate groups and organizations. It can be overwhelming deciding which one(s) to attend. I tend toward the protests where my congregants and neighbors are showing up. I check with the groups that I’ve worked with before.

If you’re new to protests, do a little research on the event, if possible (Facebook and Twitter are usually your best bet). Ask your neighboring leaders and ministry professionals:

So I showed up: what next?

At that first protest, I felt like a piece of driftwood in the ocean. I was moved along as the crowds ebbed and flowed. Slowly but surely, the chants and testimonies shaped me, smoothing out some jagged edges and revealing new parts of myself. It was powerful, but I was passive.

Now, though, I show up with intention. First, I’m aware that I’m showing up as a cis-gender, white man. In many cases, I fit the description of the person who caused the pain the community is experiencing, or at the very least created the system against which people are protesting. In my context, this means that I will be following the lead of Black organizers and attendees.

When I’ve entered the holy ground of protest that is George Floyd Square, I’ve adhered to the community’s agreements and been mindful of how my presence—while welcome—is impacting the experience of others.

In other protests, I will respond when spoken to and join in the chorus during the chants, but I will not center my own voice or body.

To be honest, as someone used to either centering myself or being centered, this made me feel awkward at the beginning. Awkwardness is nothing compared to the importance of showing up humbly, in my body, and ready to listen.

Knowing why we are showing up is also very important. I feel called to make a public stand for our Christian values of love and justice. Sometimes I might show up to bear witness to the pain and anger of the protestors, my heart breaking alongside my neighbors’, learning more about what’s going on and readying myself to help in some way. Other times, I show up as a pastor to those protesting—praying, providing spiritual care, and helping de-escalate, if needed. Check out the Twin Cities Interfaith Movement Chaplains as one example of this important work.

More and more, though, I’ve realized that I need to speak out, to SHOUT out, against the injustices that are plaguing me, as well as the people I love and serve. It can really be as basic as that.

Inviting others to show up

As a pastor of a congregation, I have often heard well-meaning (usually white) people support peoples’ causes but disagree with their methods—including protest. Moreover, many of us are taught to avoid politics in our leadership. If these are refrains you are hearing, too, I’m with you. At the same time, we cannot let these concerns get in the way of showing up and working towards a beloved community for all our neighbors.

As often as possible, I use these comments as beginnings of conversations around the goals of groups like Black Lives Matter or other local organizations who have tried for years to create change through traditional means, but the system remains rigged against them. Sometimes, I remind my community of Jesus turning over the temple tables and Dietrich Bonhoeffer’s statement: “We are not to simply to bandage the wounds of victims beneath the wheels of injustice, we are to drive a spoke into the wheel itself.” That spoke demands protest.

Finally, I have started inviting some members to join me in protest, trusting that relationships and experience will open hearts more than a removed conversation can. If you are a public leader and show up to a protest, you will get criticism. At the same time, you might model and inspire others to boldly live out their faith for the sake of justice—something well worth the risks.

Why I keep showing up

I fear that I have painted myself as someone who can always be found on the front lines. In truth, I’m usually stumbling to keep up with the young people in my neighborhood who tirelessly work and protest for justice, often because their lives depend on it. I am showing up more and more however, and though I do my best to contribute to the cause, protests have given me way more than I have provided.

When our community experiences particular levels of violence and injustice, despair has a way of sinking its teeth into us and never letting go, convincing us that there’s nothing we can do when bad things happen…or keep happening. Protesting shocks me out of this lie, reminding me that I’m not alone, and that—together—we are powerful. These truths keep me showing up at protests, and beckon me to invite others-including those of you reading this-to show up with me.

See you out there.

About the Author
Eric Hoffer lives in North Minneapolis, where he serves as pastor at Salem Lutheran Church in the Webber-Camden neighborhood. He spends most of his time with his spouse, Kirsten, and pets, Twyla and Harriet. He believes in the power of a shared meal, and is passionate about food justice issues.