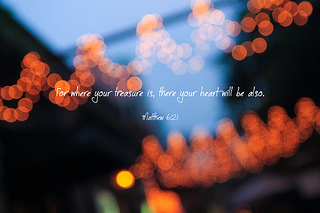 A Fresh Vision in Stewarding

A blog post by Jonathan Davis Image Credit: Matthew 6:21 by Mengjie Jo on Flickr I have this theory. Sometimes I wonder if theology and ministry are just like fashion — it’s all about what’s trendy. I listen to a lot of sermons. It seems that sermons on the same text over the years shift in focus and theology because we
by Faith+Lead | November 19, 2013

I have this theory. Sometimes I wonder if theology and ministry are just like fashion — it’s all about what’s trendy.

I listen to a lot of sermons. It seems that sermons on the same text over the years shift in focus and theology because we grow tired of the old ways. Sermons on the parable of the Prodigal Son years ago focused on the wayward son who squandered everything. But then it shifted to the older brother. Nowadays, we are drawn to the father and his wasteful and gracious love.

I can’t help but wonder if stewardship has the same problem. That there isn’t any real foundation to it — it is just whether it is novel and interesting. For a while, we all knew that the topic of “stewardship” at church meant talking about money and if we could give more. But we grew tired of that. So then, we were told that stewardship isn’t just about money. Rather, it’s about our whole life. Our time, talents, and treasures. But even this is starting to feel a little dated to me, a little worn out.

But then, a couple years ago, I heard the best stewardship talk of my life when I attended Mercy Seat. Pastors Mark and Kae shared how they loved Mercy Seat, but for it to continue, the church needed X-amount of money. They gave us a tangible number needed for 100 people to give each week. Finally, they asked if we would consider being one of those 100 people. It seemed so simple! Many people giving a little can do a lot. I wasn’t invited to pray about how much God was calling me to give back. I wasn’t given a blank pledge card to put down any number on. I was asked if I could give a specific amount. I could wrap my arms and my mind around that.

When I sat down to write about stewardship, I had nothing. So, I reread the email inviting me to blog about this and as it turns out, I wasn’t asked to write about stewardship. I was asked to write on being a steward. For some reason, stewardship and being a steward seemed like two entirely different things to me. One felt complex, boring, and even a little annoying. The other felt new, fresh, and uncharted. It was like I traded in that old, baggy sweatshirt for a new, slim cut, plaid dress shirt. Stewardship feels like something that is done to me or something I am asked to do myself. But talk of being a steward feels so embodied. Not something I do, but something I am. It’s about part of my identity.

There is something about being called a steward that gets me thinking more creatively about money and how we use it. For example, by my rough calculations, did you know that if every member of the ELCA gave $2 a year, ELCA seminarians wouldn’t have to pay tuition? Or did you know that if my congregation gave away 10% of the $6,000 savings from my new health insurance plan, we can erase the $600/per year increase to one of my fellow pastor’s insurance plan?

That sort of creative thinking about money — where many people doing a little can accomplish a lot — is interesting. It holds my attention. And it comes from thinking of myself more as a steward rather than doing stewardship.

I like what Grace had to say last week — it isn’t our money, it’s God’s. I’ll add to that. We aren’t called to do stewardship, we are called to be stewards. So, that’s my vote for the next trend in stewardship, folks. Don’t talk to me about stewardship as if it is this thing that I do. Talk to me about how I am a steward. How it is about who I am, and who God calls me to be.

Author Bio:
Jonathan Davis is an ELCA pastor, serving in his first call at the Aurora and Trinity Lutheran Parish, two churches in rural Owatonna and Blooming Prairie, MN. He is a pastor’s husband to his wife, Lauren, and dad to his son, Elliot. He is particularly interested in the intersection of faith and human sexuality. You can find his sermons at Untying the Cerebral Knot. His favorite theologian is Douglas John Hall and his favorite band is Pearl Jam.