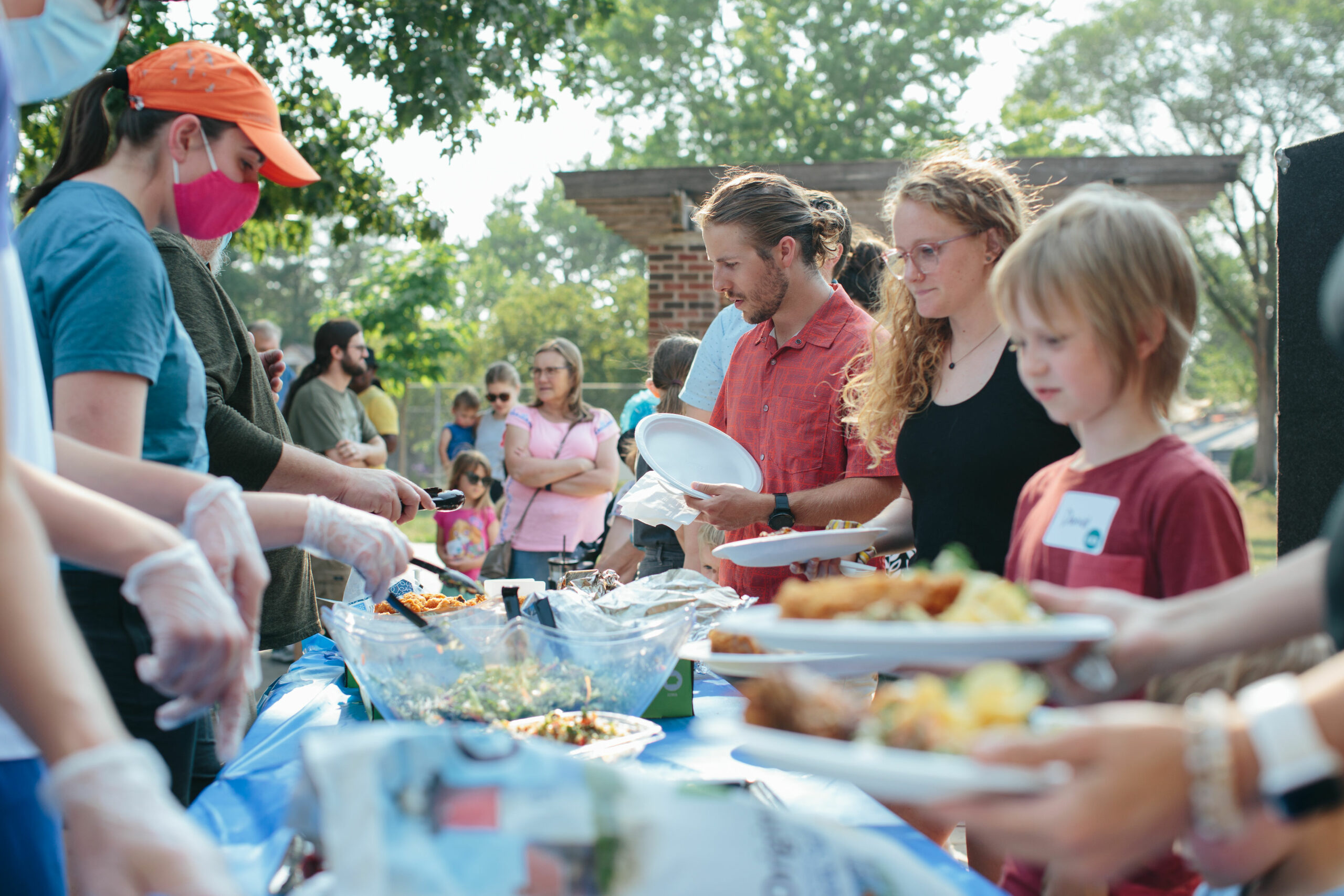 When the Table is Central to Mission

JD, along with his wife, is a co-pastor at North City Church in Minneapolis, MN. Originally from Red Wing, he started his career in the business world but was quickly called into ministry and pastored a megachurch in Baltimore, MD. During this time he was introduced to the idea of the missional church. Through readings and conversation partners, he felt called away from the megachurch and into missional contexts.

JD studied at Bethel Seminary and worked at Mill City Church in Minneapolis. He served in operations and missional communities. Around 2018-2019 JD and his wife, ChristianAnn, felt a calling to plant a church in North Minneapolis, which became North City Church. They launched shortly before the COVID-19 pandemic began and that quickly changed the scope of the ministry at North City.

When they launched in the fall of 2019 they thought they would be an urban missional church with most of their resources going towards a Sunday morning gathering, or as JD described a “Mill City 2.0.” But in the spring of 2021 they realized they weren’t actually reaching people with what they were doing. They knew North City needed to change in order to continue to follow God’s calling.

Re-focusing on the table

Through the process of launching North City Church, the word “table” was integral. JD pointed out that, “about 25-30% of the gospels happen in the context of the table. I believe Jesus was trying to shift from temple to table and empowering others to be temples of the Holy Spirit.” They were “hopeful and excited to experiment around how the table could reinvigorate mission among them.”

In the spring of 2021 North City made the intentional and bold step of leaning into the word “table” and looked at becoming a dinner church. Prior to this, they had several months of experimenting with gathering around the table in various capacities and ultimately they did not feel right about being a Sunday morning-centric church. JD connected with the Fresh Expressions network; in the summer of 2021 they began a summer of experimenting with being a table-centric church. Every other week at a park they had dinner church, and on the off weeks they had “micro church,” or community groups to keep people together during the pandemic. In the fall of 2021, North City made the shift permanent and their main gathering has been dinner church since.

The mission of North City is “To love our neighbors in the way of Jesus,” with the extension being “by creating spaces where neighbors become friends and get invited into the family of God.” For North City, Sundays are about the love of strangers and welcome. JD said that dinner church becomes the nexus for 4 presences:

At every gathering, besides eating dinner, they have 8-10 minutes to tell a Jesus Story. These stories are largely testimonial and are about Jesus and how knowing him has made a specific impact in someone’s life. After the Jesus Story they have Listening Time—a time for people around their tables, with their neighbors, to respond to the story. JD pointed out that “when you ask people to talk about a Jesus story, they immediately think you’ve put them in a Bible study, and they have to have something insightful to say.” To counter this they offer a Listening Time as just that, a time to listen and show that listening is an act of love. Sometimes people have a response to the story and other times they do not; all are welcome to share or not share.

North City gathers together Sundays at 5 in their local community center and will move outside as the Minnesota weather permits. JD said they want to own that they are flipping the model of a church gathering. “Most churches create a discipleship space on Sunday morning in hopes that it inspires mission during the week. We want to create a mission space that has some elements of discipleship.” What takes a back seat is explicitly Christian worship activities. There are no sermons and no corporate singing, although live worship music is played in the background. They are experimenting with putting those traditional elements into a concentrated mid-week format, having teaching nights or worship nights in the middle of the week.

In the coming year, North City has some challenges to work through, namely around becoming self-sustaining and what their space needs will become in the fall and winter, but JD is hopeful. “I’m hopeful because I can see the difference it is making in people’s lives, especially the ‘nones and dones’ who are coming back to church for the first time in a long time.” When asked about what advice he would have for someone looking to start a dinner church JD advises: Don’t do this work yourself; build a team and incorporate them in the discernment process but also have fun. If it is not life-giving to you, you won’t last long in it.

Aside from co-pastoring, JD also coaches people who want to start dinner churches or other fresh expressions of the church. If this is something that interests you, can find out more at dinnerchurches.com or you can contact him at jd@northcitychurchmpls.com or https://www.northcitychurchmpls.com/.

JD is also involved in another project called IMBYMN, In My Back Yard Minnesota that seeks to combat rising housing costs and create affordable housing by building Auxillary Dwelling Units (ADUs) on existing properties. You can find more information about IMBYMN at https://imbymn.com/.