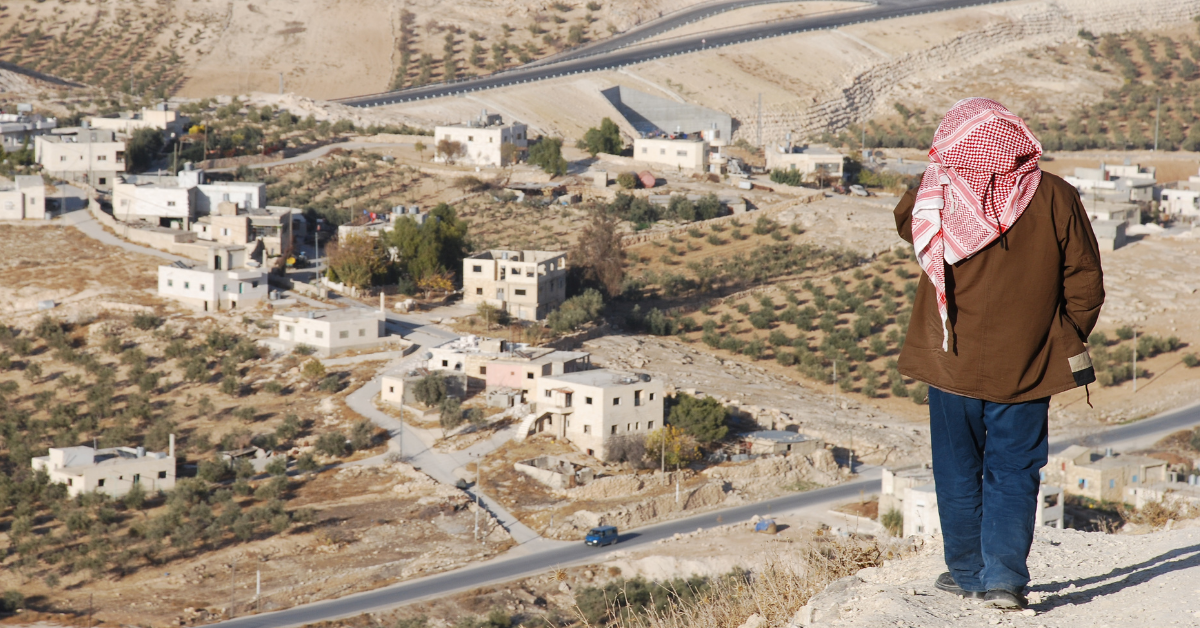 Knowledge and resources about Palestine
by Faith+Lead | June 11, 2021

By The Rev. Leyla King

In April of 1948, Farid and Bahi Oueida fled their home in Haifa, Palestine. They were newlyweds and Bahi was four months pregnant with her first child, a girl who would become my mother.  When I asked my grandmother decades later why she left her home, she replied with the simplest of answers: “We were scared for our lives.”

For the weeks and months leading up to the creation of the state of Israel in May 1948, immigrant Zionist militia groups roamed the streets of Haifa, threatening its native Arab population, destroying property and even killing Palestinians with impunity; the British colonialist government turned a blind eye and sometimes encouraged the violence.

My grandmother’s fear cradled my mother within her womb that day; her Christian faith cradled her, too, and carried them both through that terrible moment and all the wanderings that would ensue. This heritage has shaped my own faith and forms part of the foundation of my vocation as an Episcopal priest.

So, when more brutal conflict erupts in Palestine and Israel— as it did last month—I am reminded of the heartbreak and horror that still live within my body as a Palestinian American. And yet, it’s easier for me to talk about because I have a solid understanding from which to speak.

There are a number of words that get used when talking about the Palestine-Israel conflict; some of them are used interchangeably, but they shouldn’t be.  Let’s start by defining the terminology accurately.

Judaism is a religion practiced by roughly 0.2% of the world’s population.  Jews live all over the globe and have various different ethnic identities.

Arab is the noun that identifies the ethnicity/race of people who trace their ancestry to places within the Middle East and North Africa.  Palestinians are those Arabs who live or whose ancestors lived in the region of the Middle East currently identified as Palestine and Israel.

Zionism is the movement that arose in the late 19th century in Europe that—then and now—supports a Jewish nation-state only for Jews.

Israel is a tricky term for Christians because it has two different meanings.  It is the name of the modern nation-state that was founded on May 14, 1948 on land previously under British colonial power called Palestine.  Israel is also the name for the tribe of people—and later the kingdom—who descended from Abraham, Isaac and Jacob in the Biblical narrative and ancient history.

It is important to keep separate the tribal kingdom of ancient Israel that we read about in the Hebrew scriptures and the modern nation-state of Israel today.  Though they share a name and location in the same region of the globe, the two are entirely distinct.  One is an ancient kingdom, in existence between roughly the 17th and 6th centuries B.C.E. before it was conquered by a string of empires.  The other is a modern country founded only in the last century as a project of European Zionism and British imperial conquest of the Arabs.  Any attempts to conflate the two are false.  In preaching and teaching, Christian pastors must make clear this distinction so that congregants know that modern-day Israel is in no way a reconstitution of the ancient kingdom.  In fact, most Israelis are of European extraction, while native Arabs as a Semitic people are more likely to be the descendants of those ancient Israelites.

It cannot be denied that the ongoing conflict between Israel and Palestine is a complex one.  But, in the end, facts are facts.  And Christian leaders who want to engage in informed dialogue must know the basics of the history of the area over the past century, from the end of World War I when the Zionist movement picked up steam to the various wars and conflicts that led to the current situation.  No historical account of the past century is going to be short, but this primer from the Middle East Research and Information Project is a good summary.  If listening is more your style, NPR’s podcast “Throughline” recently aired an episode all about Palestine.  And for an in-depth history, James Gelvin’s The Israel-Palestine Conflict: One Hundred Years of War and Chris Smith’s Palestine and the Arab-Israeli Conflict are both highly well-regarded in the field.

Americans often assume that the Palestine-Israel conflict is about religion because Israel defines itself as a Jewish state.  But, modern-day Israel has always been a political project and the resulting conflict has everything to do with power-politics, including the white colonialism of the 20th century (of which we have repented in nearly every other context) that led to the expulsion of a less-powerful ethnic group from their land.  At the heart of the conflict, therefore, are the same kind of political maneuverings and power-plays that underlie almost every other conflict in modern history.

In addition, the tensions cannot be reduced to Judaism vs. Islam because the region of Palestine-Israel includes inhabitants that practice a variety of religions.  It’s true that most (though not all) Israelis are Jewish and that many Palestinians are Muslim.  But there are tens of thousands of Christian Palestinians still living in Israel and the occupied territories.  There would be more, but many Christians, like my grandparents, had access to escape routes over the past decades of conflict and emigrated in the face of Israeli occupation, oppression, racism and violence, so the number of Christians there is dwindling.

And then there are the stories my grandmother used to tell me about the Jewish neighborhoods in Haifa alongside those of Muslims and Christians, all of which lived in friendship.  So clearly Palestinian Jews, Christians and Muslims had existed together peacefully for centuries.

Christians know that the region of Palestine and Israel is where our faith began.  The earliest Christians were followers of the Way of Christ in that area.  So, it should be no surprise that Christians still live there, and we need to hear the perspective of our siblings in faith as prominently as all others.  The most obvious resource for the Christian viewpoint is the Kairos Palestine document, a statement published in 2009 by a group of leaders of various Christian Churches in Jerusalem.  The Presbyterian Church (U.S.A.) has since provided this handy guide for studying Kairos Palestine in congregations.

Unfortunately, antisemitism is alive and well in America.  While it’s significant to note that Arabs are themselves Semitic people, the term antisemitism typically refers to racist attitudes and actions against ethnic Jews and that’s the meaning I’m ascribing to it here.  To support Palestine or to criticize the actions of Israel is not the same as being antisemitic.  Because the struggle for equal rights and self-determination for Palestinians is a political fight and not a religious one, it does not demand hatred or antagonism towards Jews and Judaism.  Indeed, the fight against antisemitism in the U.S. is part of the same global fight for equal rights and human dignity for all in which Palestinians and their supporters participate.  As Martin Luther King, Jr. said, “Injustice anywhere is a threat to justice everywhere.”

However, it’s also true that, for decades, the accusation of antisemitism has often been leveled against supporters of Palestine in an attempt to undermine legitimate arguments for the rights of Palestinians.  Christians must listen with open hearts to anyone who says they feel harmed by our words and actions while still insisting on truth-telling even in the face of false accusations.

Both the Episcopal Church and the Presbyterian Church (U.S.A.) have specific ministries dedicated to providing further learning and education around Palestine-Israel. Perhaps your denomination does too? The Episcopal Peace Fellowship’s Palestine-Israel Network has provided this toolkit for learning.  The PCUSA’s Israel Palestine Mission Network has long been invested in this work and continues to compile educational resources and tools for activism. And the ELCA has information about their work called Peace Not Walls.

About the Author
The Rev. Leyla King is a Palestinian-American Episcopal priest and rector of Thankful Memorial Episcopal Church. She is currently developing a podcast with the Small Churches, Big Impact Collective to explore the gifts and challenges of small church leadership and she blogs about ministry and life with her husband and three young children at https://thankfulpriest.home.blog/